The Corridors of Social inequality

Effects of Water Scarcity on the Girl Child in Need 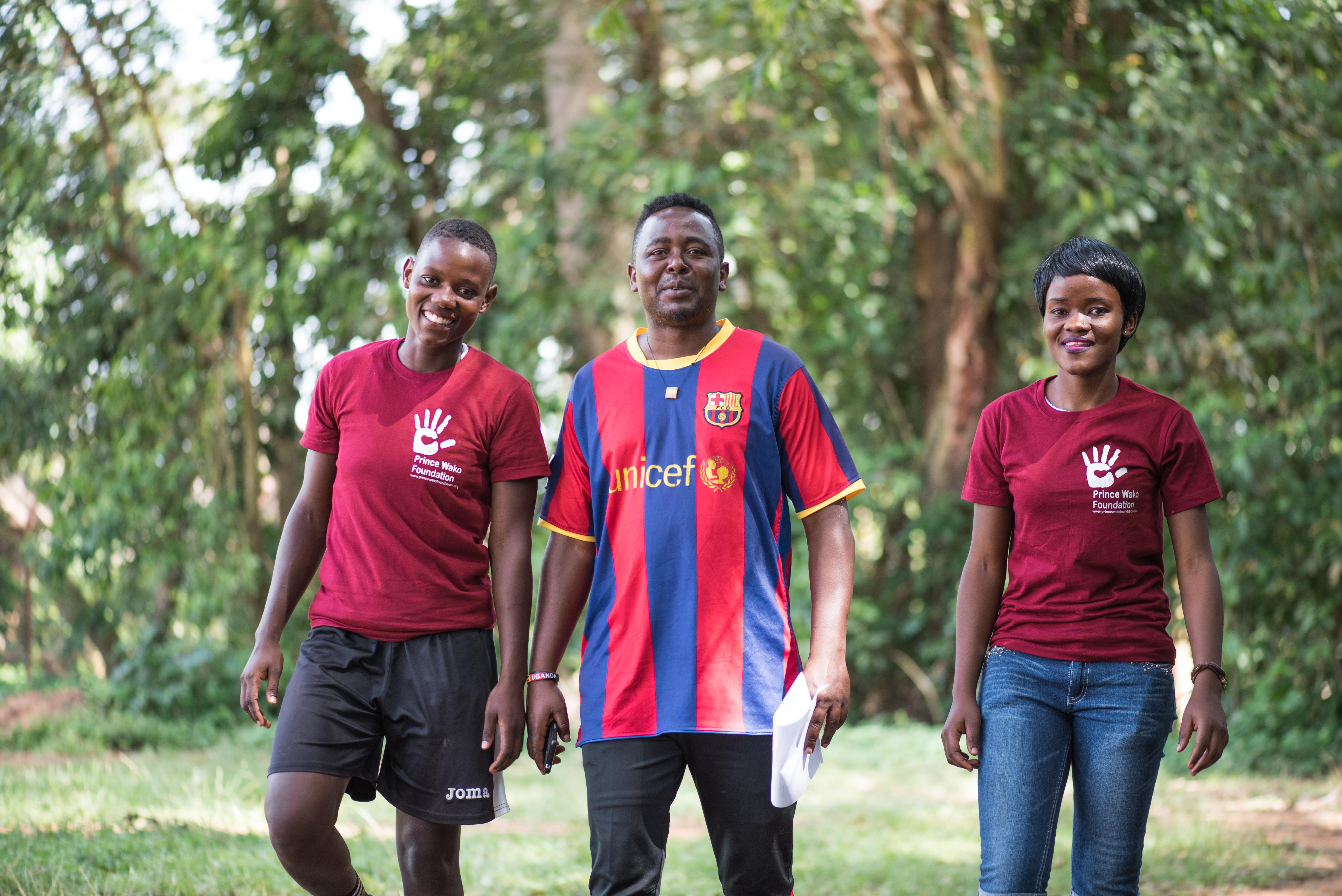 Their Experiences and strife, why we have dedicated our lives to the Girl Child?

At Prince Wako foundation, we have been challenged by several experiences that have given us a solid foundation in most of our Girl child empowerment projects. Stories we hear and the experiences we get to know have kept us on our toes, inspiring us to find resources to keep girls from underprivileged families in school, to support girls with talent in soccer and provide water sources where there is scarcity. As we mark Women’s day 2019, let us reflect on some of the experiences that have encouraged us to dedicate our lives and resources to the cause of the girl child.

“Stories we hear and the experiences we get to know have kept us on our toes, inspiring us to find resources to keep girls from underprivileged families in school, to support girls with talent in soccer and provide water sources where there is scarcity.”

On that day, ululations made rounds all over the sandy village. It was a day like no other. Villagers came from all corners of the village to confirm the news. Mbasa, the village belle, had made it there. Definitely the first of her kind. She had been announced as the first girl to make it to the University on government scholarship from the village. It was so special in a way that she had made it on merit under government sponsorship. Her father was filled with endless joy, her mother was taken up by the moment of jubilation and she immediately forgot about the discomfort of her heavy pregnancy. It was a joyous moment indeed. At Mbasa’s home, the village elders converged, their faces glowed with joy and they spoke with pride. No one cared about the restrictive customs that inferred male superiority. She became the joy of the humble village, the inspiration every focused girl needed and the hope that had earlier evaded the elders.

At the university in the City, she met all kinds of people, technology and experiences. She was indeed beautiful, but with a background of a typical village belle, she was always careful with whatever step she made in life and whatever relation she got into. She was full of herself, she loved success and also strongly believed in virtue. Whereas she focused on the progress of her academics, she could not hide away from the social life at the university. She made friends and got involved in positive social projects that made the society a better place. Many noticed and loved her attractive inner beauty and appreciated her outer beauty. She had grown up in a society where trust was so important to the extent that she thought that other people had the same views about trust. She easily trusted friends.

Her new friend Jackie, a girl born and raised in the city, so full of life and big-eyed. Her materialistic character forced her to become shrewd, given the fact that she lived a life beyond her means and loved it. Jackie sincerely loved Mbasa as a friend, she always supported Mbasa financially where she couldn’t and in return, Mbasa helped her with her academics through a series of discussions and personal tutorials, they survived together. They did all the beautiful things together. To them life was better faced as a team. A team whose foundation was virtue, love for success and hard work.  Life at the university became softer for Mbasa, her only worry was academic success. Jackie had a history that kept haunting her and she was not ready to give it up as her material needs grew day after day. What Mbasa did not know was that Jackie’s side hustle businesses involved hooking up university girls with grown men. Actually Jackie loved and respected Mbasa so much to the extent that the thought Mbasa getting to know about her side hustle businesses sent cold shivers all over her body every single night.

On 26th May, two days after the end of semester exams, Jackie organized a surprise birthday party for her friend. Mbasa had turned 22, she could not hide her joy, and her destiny was getting clearer day after day. With a few other friends they went to a night spot where other revelers danced, enjoyed whiskey and vodka. Mbasa had never tasted alcohol and she was never ready to taste it. Jackie was a self-confessed alcoholic, so she asked Mbasa to remain sober so that she provides the light to the rest of the company that was guzzling whiskey freely provided by the Men at the VIP table. Mbasa’s classmates present congratulate her, they danced to nice music and smiled time after time. The night was really one to remember. The birthday cake was cut, she served whoever cared to pick a piece. She had never had this all her life. The village belle had never had anything like a birthday party. She was fully soaked in the happiness of the moment.

Suddenly the young university party is joined by fat bellied old men that proposed to foot more bills the young girls could be grappling with. Jackie seized the opportunity to assure Mbasa, she never dealt with such company. The old fellows were embarrassed by Jackie, as she severely abused them. Unfortunately, the whiskey she was galloping was doing its best on her. The whiskey had started commanding her, her tongue became heavier but she kept dancing, the only problem was that Mbasa their light did not know much about where they were and the direction back to the University hall. Mbasa being mindful of the university hall curfew, kept pestering Jackie and the rest of the girls to end the celebrations so that they make it back to the university on time. With alcohol in control of those who were en joying the whiskey it always commanded them to insist on staying a little longer. The mean looking men seated at the VIP table responsible for availing the whiskey and the vodka had earlier agreed with Jackie. Jackie was meant to avail two good girls to spend the weekend with them, but in her state, she could not meet the end of her bargain. The girls she had prepared had left earlier due to the fear of the curfew and Jackie’s non-disclosure of the supposed contract to them.

Mbasa then gabbed Jackie, pulling her away from the dance floor where she was dancing with the two men. Jackie was not herself, she had become a nuisance and could not take any of Mbasa’s advice. ‘It is passed midnight and I have to sleep in my bed tonight,’ she sternly warned Jackie. Jackie’s two partners forced their way in between the two friends, promising to drive the girls to their University hall. The drunk Jackie agreed, immediately ordering them to drive both of them back to the university. Slowly they got into the car, Jackie started snoring as soon as she got into in the car, and the sober and awake Mbasa did not know the route back to the university from the pub. The men immediately drove off to a remote destination that left Mbasa disturbed, ‘Where are we,’ she asked. The dreadlocked driver unpleasantly told her to shut up.They drove about two hundred meters off the main road to an unknown location that had a handful of residences. They parked inside a perimeter wall as tall as the hill, inside there was a mansion. At that moment, Mbasa realized there was more than trouble, she knew nothing about the two men, and it was getting colder with every minute. While Jackie left the car, she vomited several times, and the co– driver gave her a bottle of water to drink. This helped her to sober up a little. Meanwhile Mbasa refused to leave the vehicle, she was sensing trouble all through. The mature mugged co driver held Jackie’s hands and when she lifted her hands, the nightmare became a reality to her. She knew very well the men that had driven them to the hidden mansion and the memories of the place and her passed dealings with them made her feel helpless. Like a knee jerk reaction she immediately screamed, Sensing danger the dreadlocked driver ran to help the co-driver subdue Jackie. This gave Mbasa more reason to become wilder. She ran out of the car screaming louder than thunder, she ran towards the gate banging it heavily using the loose pavers. The sanctuary had now become a source of cries for help.

The neighbors had heard about the actions of the inhabitants of this mansion, sexual perverts who did all they could to achieve their desires. The immediate neighbor, an old lady who always prayed for a moment to unravel the hidden stories about her neighbors heard the loud cries from the two distressed girls. She immediately seized the chance, she awoke her grandchildren, ordering them to supplement the alarm. She screamed and called for help. On hearing the corroborated noise, the mean looking men lost grip of the moment. The whole neighborhood awoke with great response to the old woman’s cry. She was the mother of the neighborhood and the few neighbors immediately responded to her cry. They all stormed the mansion in issue and due to the loud cries for help from a group of neighbors, the criminal minded men retreated choosing to pretend to be innocent. The neighbors continuously banged the gate till the dreadlocked man opened. As soon as he opened, the frightened Mbasa ran very fast knocking him sideways, she made it out while Jackie remained in. The old woman led party advanced in as the two men were now out numbered. Mbasa cried for help as she narrated what was going on. The two men pushed Jackie out of the home prompting the angry neighbors to retreat slowly. The two girls them stood out with their legs shaking involuntarily, the old woman interrogated them with concern, it was 2am, late in the night, and safety was already a great concern. Looking at the two young girls, the mother of the neighborhood took pity on them, she saved the interrogation for the following day. She led the distressed girls to her home, where they spent the night.

As we strive to empower the girl child this year, what safety measures have we put in place to safeguard their lives? Peace and wellbeing while looking for resources and opportunities is so vital. In a nutshell we as a society, must have a solid responsibility towards doing right. This must be seen and lived. So we know it’s not enough to send our daughters to school, but strive to provide meaningful security, resources and basic requirement to instill content and focus on their studies.